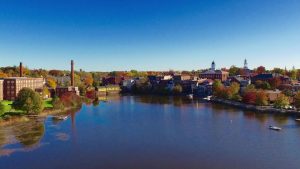 A walk along the tree-lined streets of Exeter is a stroll through history. Since the town first was settled in 1638, there’s always been a strong sense of community here. In the 1700s, colonists gathered at Folsom Tavern to discuss revolution; today, families gather at Swasey Parkway along the banks of the Squamscott River to enjoy the town’s summer concert series.

Through the years, Exeter grew from a colonial village to a thriving, industrious, 18th-century mill town with a river-based economy. Along the way, many historical figures emerged and gave Exeter its lasting legacy. John Taylor Gilman, native son and staunch Federalist, read a copy of the Declaration of Independence from the steps of the Town House when it finally reached Exeter on July 16, 1776. After the war, President George Washington visited Exeter to formally thank the townspeople for their efforts, stopping by Folsom Tavern for breakfast. And in 1853, former state representative and abolitionist Amos Tuck broke with the Democrats over the question of slavery to form a national party called the Republicans.

History lives today at the American Independence Museum, where visitors can tour the Ladd-Gilman House, which served as the state treasury during the Revolution. Each summer, Exeter’s Revolutionary War Festival is held on the museum grounds; more than 10,000 people flock to Exeter that weekend to experience a militia encampment and re-enactment of the Revolutionary War. Exeter also is home to Phillips Exeter Academy, established in 1783 and still one of the country’s most distinguished private secondary schools.

Water Street, Exeter’s main thoroughfare, is lined with small shops offering clothing, handmade candies, trendy gifts, books, New Hampshire-made crafts, children’s toys and more. A variety of restaurants are popular gathering spots for locals and tourists alike. At the center of town is Exeter’s classic bandstand, where the oldest, continuously-organized brass band in the country performs during the summer.

Exeter’s industrial park, on the western edge of town, is the site of light manufacturing firms, storage companies, warehouse distribution centers and office space. Other businesses are concentrated on Portsmouth Avenue, Hampton Road and Route 111. From health and nursing care facilities to automobile dealerships and gardening centers, Exeter has attracted a diverse commercial mix.

Exeter is easily accessible with Route 101's east-west route to Manchester or the beach, and north-south I-95 to Boston or Portland nearby.  Daily train service south into the Boston Metropolitan Region or as far north as Brunswick, ME is provided by Amtrak's Downeaster.  With its convenient proximity to nearby centers of industry, Exeter continues to be a bustling community with a wonderful spirit. 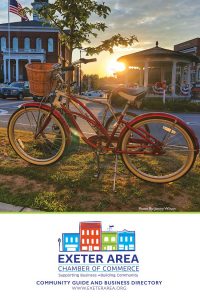